You would think when traveling halfway around the world for first time it would sink in when you are on the plane for 10.5 hours, but that wasn’t case for me.

You would think if it didn’t sink on the plane ride of 10.5, it would have sunk in as we were descending coming in over Tel Aviv. “ Hey Kathryn, New Flash. YOU’RE IN ISRAEL AND PALESTINE!” No, that wasn’t the case for me.

You would think getting off the plane, claiming my baggage, and getting in a cab to travel to Jerusalem would finally be the moment that it would have sunk in. Still wasn’t the case for me.

You would think that arriving at the Lutheran World Federation Victoria Guest House and getting into my room would be the moment it finally sunk in. Oddly enough, still wasn’t the case for me.

So when was it then? When did it finally sink in? 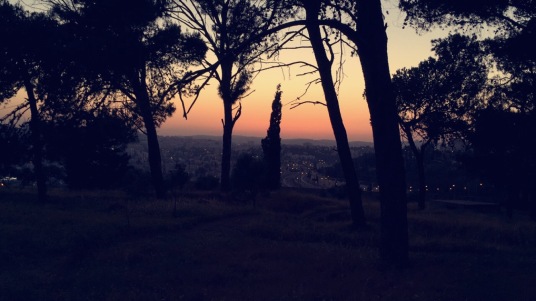 As I stand on the side of a hilltop overlooking Jerusalem as the sun set our first night here, the call to prayer in the background, it finally sunk in.

I have studied the call to prayer in my Islam class. I have watched videos. I have heard it happen. I have seen how the Muslim community responds. But never in my whole entire life did I think that I would be standing in Palestine hearing it actually happen.

Christians do not even have a time where they all come together in one moment.

As I stood on the hilltop watching the sunset over Jerusalem, hearing the call to prayer, it hit me. “Kathryn, you’re in the Holy Land.”

Kathryn Kester is a student at the University of North Dakota. She is studying Religious Studies and Non-Profit Leadership.